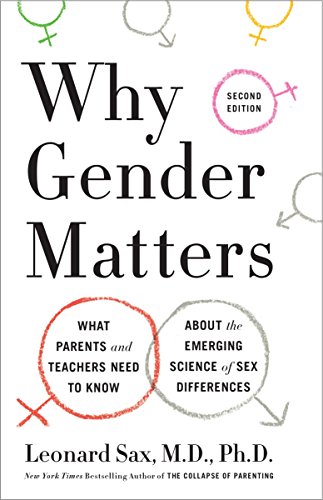 (Eng) Why Gender Matters : What Parents and Teachers Need to Know About the Emerging Science of Sex Differences

Why Gender Matters, Second Edition: What Parents and Teachers Need to Know About the Emerging Science of Sex Differences

A revised and updated edition (with more than 70% new material) of the evergreen classic about the innate differences between boys and girls and how best to parent and teach girls and boys successfully, with completely new chapters on sexual orientation and on transgender and intersex kids.

Eleven years ago, Why Gender Matters broke ground in illuminating the differences between boys and girls--how they perceive the world differently, how they learn differently, how they process emotions and take risks differently. Dr. Sax argued that in failing to recognize these hardwired differences between boys and girls, we ended up reinforcing damaging stereotypes, medicalizing normal behavior (see: the rising rates of ADHD diagnosis), and failing to support kids to reach their full potential. In the intervening decade, the world has changed drastically, with an avalanche of new research which supports, deepens, and expands Dr. Sax's work. This revised and updated edition includes new findings about how boys and girls interact differently with social media and video games; a completely new discussion of research on gender non-conforming, LGB, and transgender kids, new findings about how girls and boys see differently, hear differently, and even smell differently; and new material about the medicalization of bad behavior.

About the Author
Leonard Sax MD PhD graduated Phi Beta Kappa from the Massachusetts Institute of Technology (MIT) at the age of 19, and then went on to the University of Pennsylvania, where he earned both a PhD in psychology, and an MD. He completed a 3-year residency in family practice in Lancaster, Pennsylvania. For 19 years, Dr. Sax was a practicing family physician in Maryland, just outside Washington DC. He now sees patients in West Chester, Pennsylvania (west of Philadelphia). In 2005, Doubleday published his first book Why Gender Matters; an updated edition was published by Harmony in 2017. His second book, Boys Adrift, was published in 2007. His third book Girls on the Edge was published in 2010; an updated edition will be published in 2020. His most recent book The Collapse of Parenting was published by Basic Books in December 2015 and became a New York Times bestseller.